Here are links to a couple of reviews for Rock Hard that were posted yesterday:

Contemporary Top Pick at The Season – Note: You have to click on the book cover to read the actual review.

Schwewww, glad they liked it. 🙂

Okay, and now for the results of yesterday’s poll and the very long story about how the current title of book 2 in the Sinners on Tour series, Rock Hard, came into existence. Let us gaze upon its beauty first. 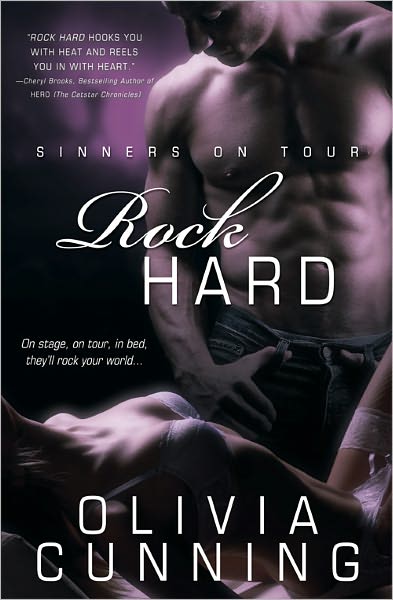 That’s lame, you say! Well, the original titles for the entire series (when I first started writing it) were

My publisher didn’t think those titles were sexy enough, so they renamed Brian’s Muse, Backstage Pass. Know how I found out? They sent me the final cover. I was STUNNED that they changed the title without telling me. And at first I didn’t like it. Not because it’s a bad title, but because it wasn’t my title. (I’m stubborn and want things my way, dammit!, that’s why my heroines tend to be stubborn.) Now, I like the title. It grew on me.

Since it wouldn’t make sense to have the second book called Sed’s Pariah if the first book was no longer called, Brian’s Muse, I renamed Sed’s book…

*Eric drumrolls again* (go, baby, you look hot when you pound those skins)

Again with the publisher not thinking it was sexy enough. sigh… Apparently, I don’t pick sexy titles. And there is some glee-type movie of the same name that came out recently, so they came up with the following as the third title of Sed’s book…

*Eric and I exchange side-long glances* (yes, he’s hanging out with me today. Jealous?)

Um, when you read the book, you’ll understand why I threw a bitch fit and went all diva. (I do that on occasion.) I hated the title. It was intended to be “tongue in cheek”, but it is so opposite of Sed and Jessica’s love life that… well… Yeah, I went diva. So they told me to come up with a list of titles I would be happy with and put them in order starting with the one I liked best first. I started with a list of around 100 titles and pared it down to about 20. Rock Hard was third on the list. Encore Seduction was my first pick. But they LOVED Rock Hard, so Rock Hard it became. And I was happy because I had a say in what my book would be called. (Yes, I’m weird that way…)

Who knew naming books was such a pain in the ass? And that I could be a diva? *Eric raises hand*

So why didn’t anyone think the book was originally called  Slightly Firm? LMAO! No smartasses in the audience? *Eric raises hand*

Falling for the Frontman and Public Liaisons were also on my list of acceptable titles.

Have a great weekend!

← En-title-ment
How Important Is Size? →