First, let me say that 13 has always been my lucky number. I’m sure that influenced this post in some way.

Shandi shared her love of all things drummer with me, but her love for one drummer in particular. This is Dan Adair, the drummer of Nickelback.

Regretfully, she couldn’t find a shirtless picture of him, but pointed out that his dimples are exposed. I do love a tough guy with dimples (points at Sed Lionheart as evidence. swoon!).

While we’re on the subject of Nickelback hotties, I thought I’d share the inspiration for Logan, the bassist of Exodus End. It just so happens that he is also in Nickelback, though he’s not the bassist. Also not shirtless. 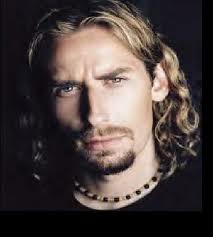 Lead singer Chad Kroeger. But you knew that, right?

That’s Logan’s rocker inspiration. This is his body double.

Sorry it’s so tiny. (That’s what she said…) The picture, not the em, thing tearing holes in his undies…

I had the full-sized image on my old laptop, but its hard drive fried. Maybe it was that picture that fried the hard drive. (Heh, I said hard…) And since my mind is already in the gutter today, I might as well share some of Logan’s book. A little excerpt from the first draft of Insider. My, I’m feeling generous today. Must be the 13th Hottie HD making us all so lucky.

The bus lurched unexpectedly and the driver cursed at whoever had cut him off. “Learn how to drive, asshole!”

Bobbie took a step backward to steady herself and bumped into Logan who was still standing directly behind her. He grabbed her hips to steady her. There was nothing steadying about the man’s hands on her hips. Or the progressively hardening cock prodding her in the ass. From the feel of it, his dick really would run those android-makers out of epoxy.

Instead of pulling away, she relaxed against him. He tensed and shifted her hips a fraction of an inch.

“Fuck, woman,” he whispered in her ear. “Don’t encourage it. I’m having a hard enough time trying to convince myself that you’re off limits.”

She was starting to think he was attracted to her and not just toying with her for his personal amusement.

“I’ll also need to interview each of you,” she said to the rest of the band, who were watching the two of them with expressions ranging from amusement to bewilderment to annoyance.

“Tonight?” Steve asked. “Probably not a good idea. I’m a bit out of it after a show.”

“You’re always out of it,” Logan said.

“Yeah, I’m about to crash,” Dare said. “It’s been an exhausting day and we have a full day tomorrow.” He ticked off events on one hand. “Record signing, radio interview, sound check, meet and greet, concert. I might need to take a piss in there somewhere.”

“You don’t have time to take a piss, Dare,” Logan said.

Dare offered Bobbie a half-smile. His piercing green eyes threatened to melt her into a puddle on the floor. Hummina.

“Why don’t we start the interviews the next day? We’ll have a long boring drive that day followed by two nights in a hotel. We should be more ourselves then.”

“That’s fine with me,” Bobbie said. “I want this book to reflect what wonderful men you are.”

Logan chuckled. “I think you have us mistaken for some other band.”

She shook her head. “No mistake.”

Bobbie glanced at the bunks on either side of the corridor. There were four of them. “So I guess I get to sleep on the couch?”

“The floor?” She curled her nose. No telling what kinds of things were on that floor.

“You’ll sleep with me,” Logan said. “You have no other choice.”

Bobbie assessed each member of the band. “Actually, I have three other choices.”

“Not necessarily,” Bobbie said. “I just like to keep my options open.” As if even one of these guys would consider her an option. Right, Bobbie… Keep dreaming.

“There’s a sectional sofa in the back lounge. You’re welcome to sleep there,” Max said.

Logan’s hands covered her ears. “Don’t tell her that,” he said. “I’m making my move here.”

Bobbie laughed. She was used to being the brunt of jokes. She’s learned long ago that the best way to protect her feelings was to join in on the fun.

“Maybe there’s room on that sectional for two,” she said.

Logan spun her around and escorted her to the back of the bus. Next to the bathroom, there were a set of sliding doors that she hadn’t noticed earlier. They were black and shiny and if not for the latches and the seam between them, they would have looked like a solid wall. Logan lifted the latches and slid the doors open to reveal a pale blue, semicircular sectional sofa. Several guitars hung on the wall above it. Bobbie took several steps into the room, her gaze locking on a worn Flying V guitar. In her research, she remembered Dare Mills used an old Flying V to compose the guitar music for Exodus End. She gaped at the instrument, wondering if it was Dare’s legendary guitar. How many amazing and famous songs had been created in this small space?

The sound of the doors sliding shut behind her made her heart skip a beat. She turned, thinking Logan had left without even telling her good night, but he was standing just inside the closed doors, looking more like a lion with that golden hair than a wolf, but she was definitely feeling like a feast of lamb.

Dare has a rocker inspiration, too. But I can’t find a picture of Bullet for My Valentine’s Matt Tuck in the shower. Dammit!

Wait, maybe this is him.

This is how my brain works. I start with a picture of a cute drummer with dimples and somehow end up with a naked guy in a shower. Scary huh?

Laura saves the day by sending me a full-sized copy of Logan’s body double. I hope it doesn’t fry my hard drive.