Available Now! Touch Me – One Night with Sole Regret #4

Well, I tried to keep this a bit under the radar and planned to announce it after it was available everywhere, but some fans found out that it’s live on Amazon already, so I guess I’ll announce it now.

Finally! The next Sole Regret novella is available. I just released Owen’s book, Touch Me.

Charity made this cool graphic to commemorate the event! 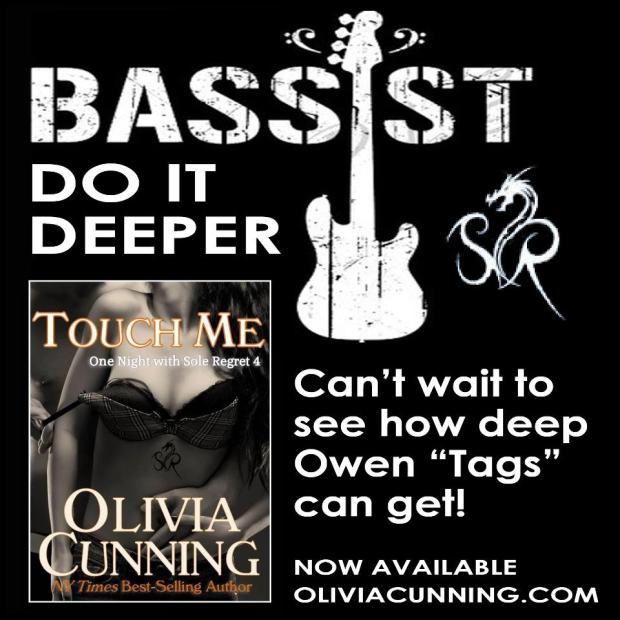 Book 4 in the One Night with Sole Regret serial series

He went there looking for a sure bet…

Sole Regret’s bassist, Owen Mitchell, is convinced that romance is for chumps. He’s only looking for a good time, and when he spots an attractive, older woman emitting men-suck vibes at a brand new sex club, he’s sure he’s found it.

She went there hoping to get over her ex-husband…

Successful business woman, Caitlyn Hanson, is still infuriated and hurt over her ex-husband’s affair with a much younger woman. She’s only looking to scrub his claim from her body by offering it to the first attractive man who shows her interest, and the young, hot stud, who just sat down at her table, will do quite nicely.

They never meant to get personal…

Caitlyn knows she’s not supposed to get attached to Owen just because he gives her body pleasure unlike any she’s ever known, but it’s her first one-night-stand and she can’t seem to keep her heart out of the equation. For once, Owen finds himself in the same conundrum. He likes Caitlyn too much to keep his heart at a safe distance, but will a mistake from Owen’s past drive her away forever?

I hope you enjoy it!

21 thoughts on “Available Now! Touch Me – One Night with Sole Regret #4”